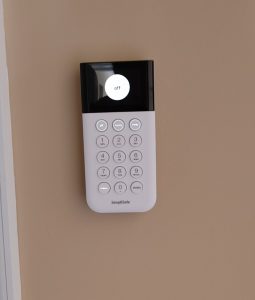 Ever try to add a second home to an existing Simplisafe installation?  It’s not easy to find out how to do this.  Turns out it’s fairly simple to do.  However it’s poorly documented.  That’s why we wrote this article.

This is one of a series of articles on Simplisafe.  We are big fans of this security system and have also cover topics such as mounting the SimpliSafe SimpliCam and SimpliSafe entry sensors.

Adding a Second Location to the App

Some of this was discovered by accident because as previously mentioned, this is a poorly documented subject.  Can’t imagine why because you’re going to pay an additional fee to them for monitoring a second home (sorry no bulk discounts).

Here’s how to do it.

From your app, click on the menu then click on Activate New Service.  Next you will be presented with two choices.  The choice to click on is to Add or Upgrade Monitoring.  Now, it’s really a matter of setting up your system.  Exactly like you did when you added your initial system.  The app will prompt you to scan the QR code on the bottom of the base unit.  It will then walk you through the dialogue for adding the address, number of occupants and a few other questions.

You will also be given an opportunity to select your monitoring plan.  There’s several plans that range from do-it-yourself monitoring to a full package from a central monitoring company.

Accessing a Second Home in the App

Switching locations is also simple.  Just have to know which buttons to push.

Open the app and take a look at the upper right corner.  You will see a little house.  Tape on the house.  Simplisafe will prompt you to select your location.  You will have full capability to arm/disarm or change the second location.

It’s really a well done integration and once setup, will work quite well.