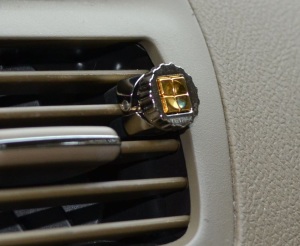 We have been asking about mounts that will fit on vertical vents for many years and there are finally enough out there for us to discuss.  Most cars have vent slots that go across versus up and down and almost all vent mounts are made primarily for horizontal vents.  The reason for this is that vent mount use a clip that grabs onto the horizontal slat.  They are not made for verticals.  We have run into a few car models where the vertical slats were spaced at the same width as the vent arms and they fit ok, but for most vertical vents, these are not going to work

You need a vent mount that deploys a vice or has vertical grippers to hold the vertical slat.  Finally, solutions are available for vertical vents.  We will cover a few of the available options.  Ironically these are all magnetic mounts which is a welcome recent trend among mount manufacturers.

Thinking a little out of the box, consider the Arkon Magnetic Air Vent Mount.  These mounts include a very thin metal strip that will attach to the back of your phone.  Attaching your phone is as simple as holding it up to the vent mount.  The vent mount will attach to horizontal and vertical vents.  There is an adjustable mounting base that can be turned to orient it to either variety of vents.  This is an unusual feature for a vent mount as most are made to only fit horizontal vents.  The mount can be used for phones or GPS units.

has a magnetic surface a little larger than a US Quarter.  The back has four prongs that are used to attach to a car vent.  This design allows attachment to either a horizontal or vertical vent.  The attachment to the vent slats is accomplished by aligning a vent slat between the prongs and pushing forward.  The attachment seemed relatively secure but not quite as tight as other vent mounts that use clips to attach to the back of the vent slat.  I’m not too worried about it falling off, and with a day of use under my belt, it hasn’t budged.  There isn’t a pivot available, so the angle of the device will be horizontal to the contour of the vent.  Read our recent review of this mount here.

Tetrax, based in Italy, has developed a mount that combines a very small vise with a magnetic attachment for your smartphone, GPS or anything that weighs less than 300 grams (10.5 ounces).  The magnetic attachment is paired with a small metal adhesive plate that attaches to your device.  According to Tetrax, the magnetic disk embedded within the mount will not affect the performance of your device as the metal plate they provided acts as a shield.  The Tetrax XWAY and GEO lines are the vent mounts.  The XWAY is a heavier duty mount and recommended for GPS units and SmartPhones.  The GEO is best for SmartPhones and devices weighing 150 grams (5.25 ounces) or less.  The GEO works great with our iPhone in an Otterbox.  The Otterbox has a small circular opening on the back with a plastic shield.  I guess the intent of that opening is so that you could see the Apple emblem on the back of the phone.  Never made a lot of sense to me, but it works well as an almost perfect fit for the adhesive plate from Tetrax.  Trying to stick the adhesive disk to any rubber case directly will likely result in a fail as the adhesive does not stick well to rubber or silicon.  They are made to stick to smooth non-porous surfaces.